When we went to Thailand Maya wasn’t really a toddler. She didn’t actually walk yet, but took her first few steps in Thailand. Anyways, I just thought the title looked nicer like this, but she might actually still have been more of a baby.

Our first encounter with Thailand was landing in Bangkok after a long flight from Norway. We had slept minimally and just wanted to take a nap really badly. Unfortunately our hotel didn’t have any possibility of an early check-in, so we threw ourselves down on the lounge chairs by the pool. I think I actually slept there for a bit with Maya.

When we finally got our room we couldn’t help ourselves and took a long nap of probably about three hours. We really wanted to avoid getting jet lagged and get into a normal rhythm like we had done when we went to Brazil. The problem was that we had gone back in time as opposed to forwards, and at the same time the time difference to Thailand from Norway in summer time is greater than that of Norway to Brazil in winter time. So when we put Maya to bed around seven PM we really thought that she had gone to sleep for the whole night. A couple of hours later a pizza that we had ordered arrived and Maya woke up to join the party. Truth be told we were a bit disappointed, mixed with a feeling of being pleasantly surprised as she danced her way over the tomato covered crust.

The next day we obviously woke up later than expected and found ourselves able to take in the beautiful chaos that is Bangkok. We went sightseeing and enjoyed as much as we could before heading out to Cambodia. More about that in another post.

Two and a half weeks later we arrived in Thailand yet again and this time we went directly to Koh Samui. We had chosen the area because it would be the least rainy of the Thai regions. This was July, and most places were in full wet season.

We stayed in a nice little resort in Chaweng, right on the beach. There was no pool, but the sea was shallow, quiet and crystal clear with white sand. One of the more beautiful beaches I have had the pleasure of going to. Clean and not too crowded (well, it depends on your references, but nothing compared to Brazilian beaches, I’ll tell you that!).

After a week we decided it was time to go to another place, and we headed out to Koh Tao. Unfortunately we were very disappointed with the place, and headed back already the next day. More about this in a separate blog post.

We spent a total of two weeks in Koh Samui. The second week we spent at a slightly more fancy resort a little bit outside the city of Chaweng. It had several pools, and there were many children there, which was very nice for Maya. The only bad thing about this resort was the location. The beach in front was not as nice as the previous place we had stayed, so we ended up either hanging in the pool or walking a kilometer or so down the beach to a place where the water was clearer.

During our days we mostly spent our time in swimwear, not doing much aside from digging and bathing, eating local dishes and trying out different fruit juices. On some of the evenings we went to a local gym and trained Muay Thai with a local trainer who happened to also be a professional fighter. The gym was located right next to Chaweng night market, so after a hefty workout we would go down there and have some dinner and more of those fresh fruit juices and smoothies. Our favorites were grilled fish, grilled pork ribs and this spiraled fried potato on a stick.

Maya generally took an extra nap during the day so that she would be up to going out for a later dinner. 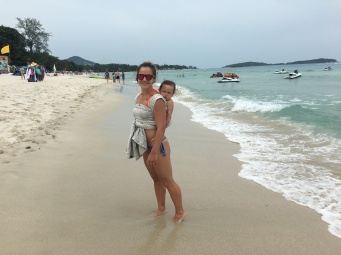 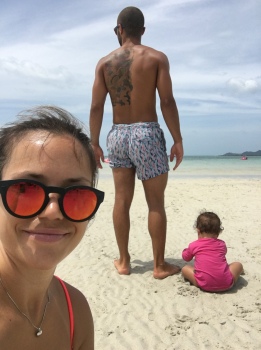 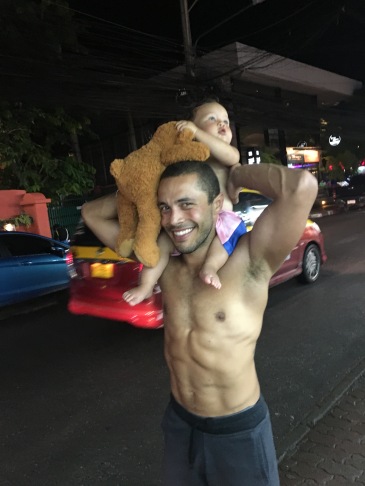 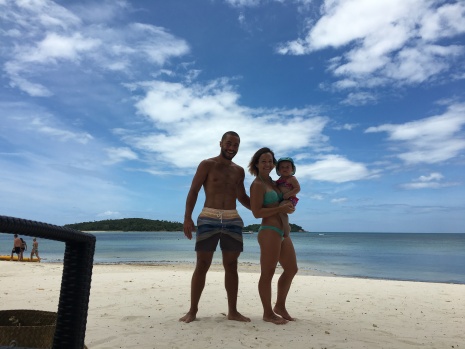 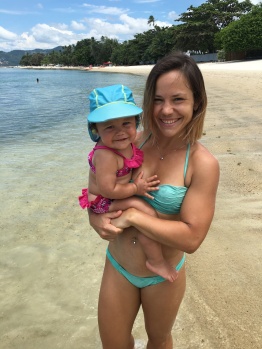 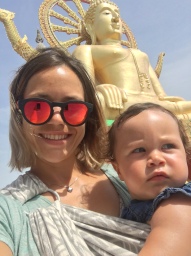 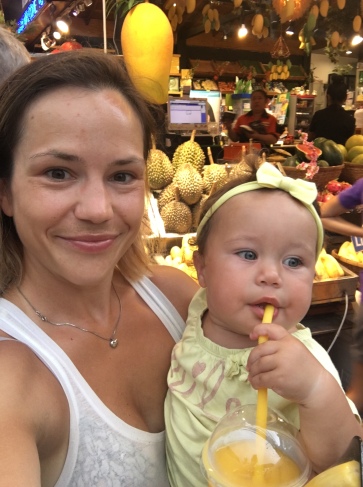 Top tips for going to Thailand with a toddler: